So today was the day I would start the engine!!

I can confidently say it went well very well, well kinda!  Cranked the engine for a while with fuel pump disconnected and plugs out, watched the oil pressure rise and stabilise.  Put the plugs in, IC back on and nervously turned the key, couple of cranks and she fired up straight away

sorted that later, all air locks removed.  Ran it to operating temp, rad fans kicked in around 95c once they went off, killed the engine and let it cool before checking the fluids.

Ok so now heres the problems, engines got to come back out

for some strange reason when pressing the clutch pedal down a grinding noise can be heard?? almost like trying to select a gear when clutch not used! Ive ordered an endoscope to see whats going on before removing, I can only think when I man handle the box back on with the trans still atached to the box ive damaged the splines on the pressure plate?  What I dont get when the engines running, no grinding noises can be heard only when the clutch is starting to be pressed, id say after half of the travel?

Turned engine off and selected first, started engine up let it idle but could hear some strange sound from the near side rear wheel

while its rotating a clicking tapping noise is present, think its a wheel bearing issue, grrrr, possibly not fitted it right or its faulty.  All 4 brand new from ICP..

Finally while it was in gear I expected all 4 wheels to rotate, but the front drivers doesnt?  is this something I should be concerned about?

Other than that alls good

The idle after doing the throttle bodies is bang on, throttle response is crisp too.

Dodgy quality video of OBD Scan Tech data while it was running, I did upload in HD but looks pants for some reason?

When turning the drivers front wheel manually the rear wheels move, the brake calipers binding on the front, maybe reason why it's not turning in gear transferring power to left front?

front driver wheel not turning nothing worry about, that just because open diff & like you pointed out yourself more binding that side possibly and also longer shaft & support adds resistance too .

Another issue solved, the bearings fine its the brake pads

Hence the noise when wheels rotating..

Onto the clutch, I think when I tried to get the box on I have bent a spline on the pressure plate, as the bearing pushes onto it when putting foot on clutch pedal, the bent spline is hitting the friction disc! I'll no more when the endoscope arrives next week!

I reckon you right on clutch too, likely friction plate bent & when cover pressed enough to release it you can here it catching against cover intermittently as it like a buckled bike wheel lol .

Your defo right there mate, glad it is only a clutch!

What part of the friction plate could bend?

Edit: It sounds like when you put a playing card in bike spokes.. 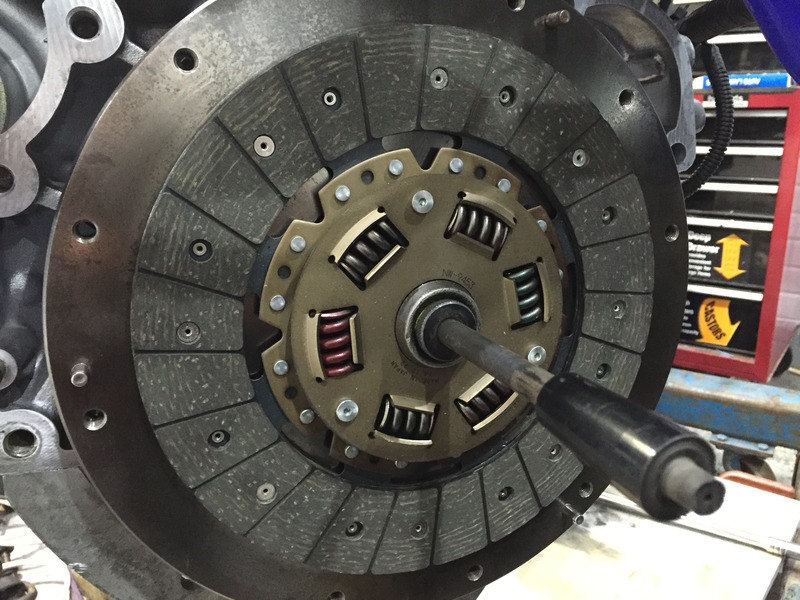 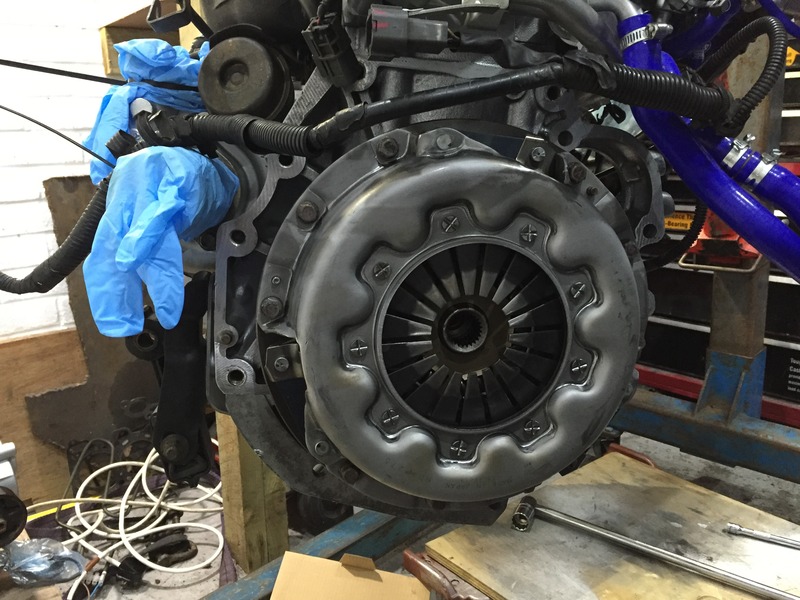 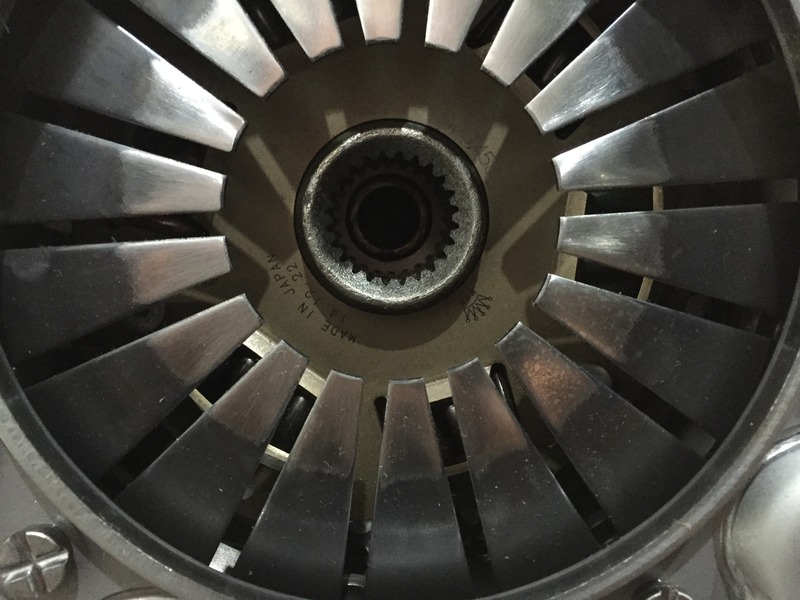 Definetly a learning curve! not to rush in future and not to try and lift the box and transfer on my own

Dude that sounds nasty lol glad you are making progress though.

Did you fit the metal spacer for the box ? It was not cut ? Some people cut them if they forget to fit It's not the fly catching it ? But you said it was not all the time

Yeah I forgot to fit it so err cut it, but it's only when I press the clutch pedal in more than 2/3's as though the fingers on the cover are bent in slightly, as the release bearing pushes them in they start to catch on the friction plate... I cut that plate by the starter motor.

@burrows1980 wrote:What part of the friction plate could bend?

Edit: It sounds like when you put a playing card in bike spokes..

Is the clutch plate fitted the wrong way round??? Looks like it in that picture.

It's the way my old one was

@gtir_woody wrote:Dude that sounds nasty lol glad you are making progress though.

Thats not pete in the car is it grinding gears? He is terrible
_________________
Now Shagging sheep on the cheap
You wont find one that's for keeps
Spend the money, find a honey
'Shit' think I need to sell my Sunny!

But woman cant replace a sheep
Oh I wish that for the peace!
But I really cant find my honey
The only one I would give my money
Is one with a great big fleece
And then I would be at peace...

Plate looks right way round
Hub of plates tend get buckled if box weight hanging on them while struggling fit
Suppose you could of done similar on cover finger
Other thing due to noise description is perhaps metal plate catching on starter ring when fly loaded a bit !

Hoping the endoscope comes today can see what the problem is, providing i can get the camera to the problem!

This clutch noise is exactly the same as what im having, Brand spanking new clutch in mine and if its bent then thats not good really. That said im having my box rebuilt whilst its out again, if you get to the bottom of it dont forget to let us all know

No worries mate, will post it up that what's this forums all about

I know I've bent something as I was stupid the way I tried to get the box on, rushing late at night not a good thing!! Best of it is as I couldn't get the bastard bolt in, I ended up taking the transfer box off to get the bolt in, and I did think I should take the box off to check I hadn't damaged anything but decided not to

LOL Most of us are all on that learning curve

Only had the car 7 months and its the second time engine and box have been seperated ive done about 100 miles in it if im lucky lol but once its done it will be right. Unless owning a pulsar is like reaching for the stars?

I should probably update teh project log too haha

Endoscope turned up today, after checking out the wax in me ears and bogeys up me nose I went out to the garage with it

The vids still uploading to youtube, going to take another hour or so but I have got a screen shot of what I found.  I applied a small amount of copper grease to input shaft before installing onto engine.  One of the fingers has copper grease on now and just behind that finger is what looks to be a scratch/gouge or strand of metal sticking up 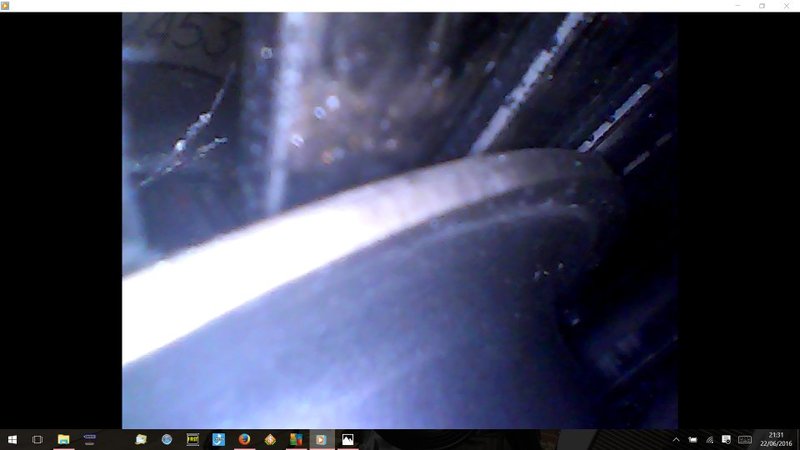 Not fully sure what it is but looking at my old cover I dont think Ive bent a finger enough for it to hit the plate? think its defo engine out to properly inspect.

Will put the link up to thevid when its ready!

Certainly interesting, I would have thought you would be very unlucky to bend that section. However that scratch mark you are referring to could be something.

So heres the vid, not the greatest but the best i could do

you can see the scatch starting or what ever it is.. If im allowed this friday I will try and drop the lump to see what it is, but im not holding my breath tbh as the wifes still suffering

Looks like it might be a cracked pressure plate to me, orginating at the spline.
If so it may explain the noise and why clutch pedal sticks.