Hi good people , my name is Dan and I am about to take the plunge once again into all things gtir with the purchase of R number 3.

I have been on the Gtir forums for 12 years and was pointed to this site via Mr Haywood . So as this is a very vibrant and busy forum it would be the best place for help and support in the long road ahead. I will give you a snipit of my r history.

Gtir 1 was a near nut and bolt build and i poured so much time ,money and love into her! This ignited my love for the R. I regretfully had to sell her after completing it as I was a student and something had to give.

Gtir 2 . This was a rotten beast and was great fun to drive but I had an offer of a life time on it and could not say no.  Both the links to these cars are now  unfortunately dead .

So after mk2  crxs one of which I had for 7 years I have come back to my first choice !
Having been a little late out of the blocks with starting g a family I now have a little more time to myself and want to get my head into these wonderful cars.

When I get her home I will upload photos and a full detailed spec.

For now I will show you where she will be living . 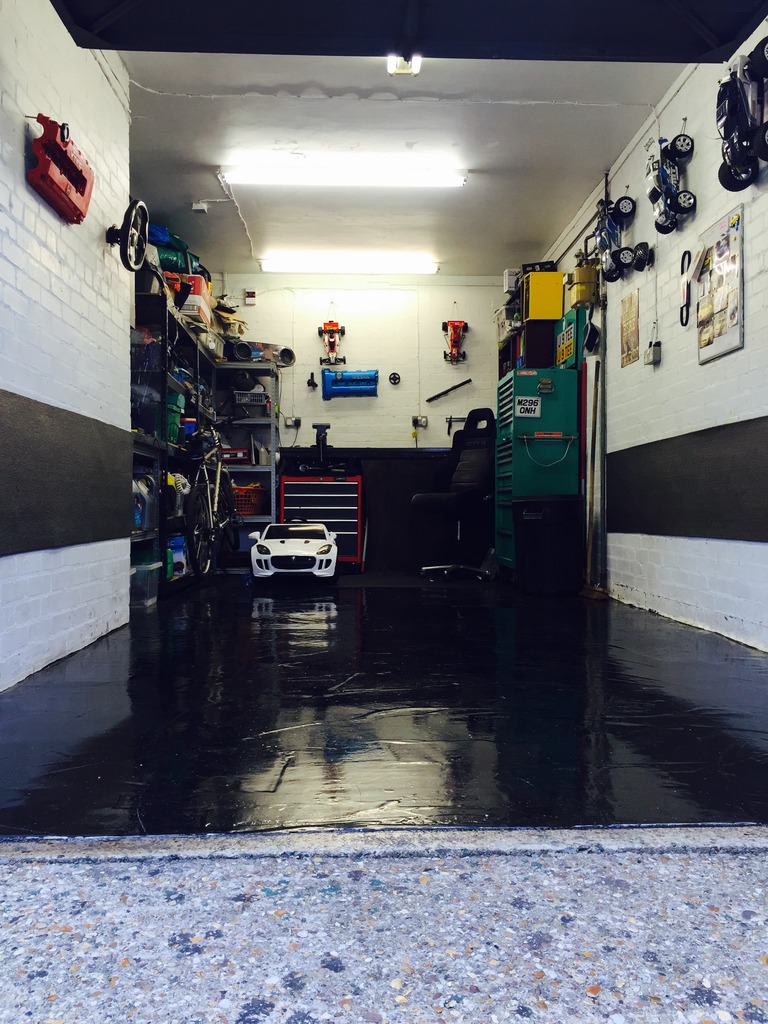 Welcome to the forum. It is busy and any info just ask some very clever people from all backgrounds on here. A fair few that just read posts but should write don't have to be car related. So what's the condition/spec of the new one if you get it

There's quite a few of us in the midlands, in fact you just missed a really good meet last week at Santa Pod.
Looking forward to seeing your R and give us a tinkle if you need help.

Hi and welcome Dan.
What was your user name on modifiers? Not Danmo?
Would be good to see pics of your old R's aswel as your new one

Welcome to the forum mate, it would take alot of commitment to do a near nut and bolt build, shows you really like the car

Thanks chaps, my user name has always been DRC on all car forums. I will surely be asking questions and picking minds over time. The car I'm collecting is from a member of th OC but he keeps out of the main flow on there. The car is not up for sale and was a reply to me posting in the wanted section. I am Looking forward to spending lots of money ,feeling defeated and frustrated.

but all try to help each other out

I got up at 5 to catch the train from m Narbourogh to Neath. Upon arriving around 11 the weather was drizzly and miserable . I met the seller at the station then we went for a spin in the car. We have been communicating for a couple of weeks now and he has been very honest about the car. I did have it checked over by s third party before I got there just to be sure .
It was exactly as discribed . So I was happy.
I won't name him yet but he really is a very genuine chap who has put lots of time and effort into the car!

We did the deal and also got a few freebies thrown in and set off on the 200 mile trip. The car drove very well much better than I expected . The clutch is not as bad as I thought it was going to be being a twin plate and the ride was comfortable for a 25 year old car.
Overall I am chuffed with the car and can't wait to start getting on with this project.

The car has covered about 400miles in the last 6 years I think so it needed s good run , which it got.

So the spec
I will copy the email I had and add to it in time
So here goes
DRC said: ↑
If you don't mind I would like to look over your build and see some pictures. Cheers
Yeah that's fine mate. I'm away with work at the mo, but I'll be home over the weekend and get some photos for you. Current spec list is below. It's currently running base pressure because the numpty of a 'tuner' I took it too last time has plumbed the boost controller incorrectly. He has plumbed it for an internal wastegate instead of external. It's an easy fix, but I was waiting until I took it to Ed at Fusion to swap it around and remap it. The engine is actually one that Ed and Ashills tuned up a few years ago.

Other things I had on my list was to install bucket seats, flock the dash, uprate the rear brakes and maybe install a cage depending which route I went down.

I've had the car for 12 years now, and the reason I'm selling is because since my first little boy came along, I've had next to no time to play with the car and get the things done. And now that my second is due in a month, I'll have no time at all, and it kills me to see it just sat there gathering dust.

I've put a lot of time and effort into the car over the years, and don't want it going to some chav who's just going to destroy it. I know it's not the pristine car you want, but I'm open to offers if it's something you think you could take on and progress.


So that's the basics . It does have some rust and needs a good bit of TLC .
I have spoken to bob and I am hoping to get in in for a full check over and mapping session this week as it is only set to 1.2/3bar and does not pull like it has 420 in all honesty . Plus I need lots of bits of which I will pop up a list in the parts wanted section.

Here are a couple of pics

More to follow. I have already lowered the bonnet back to normal as it was raised to aid cooling . 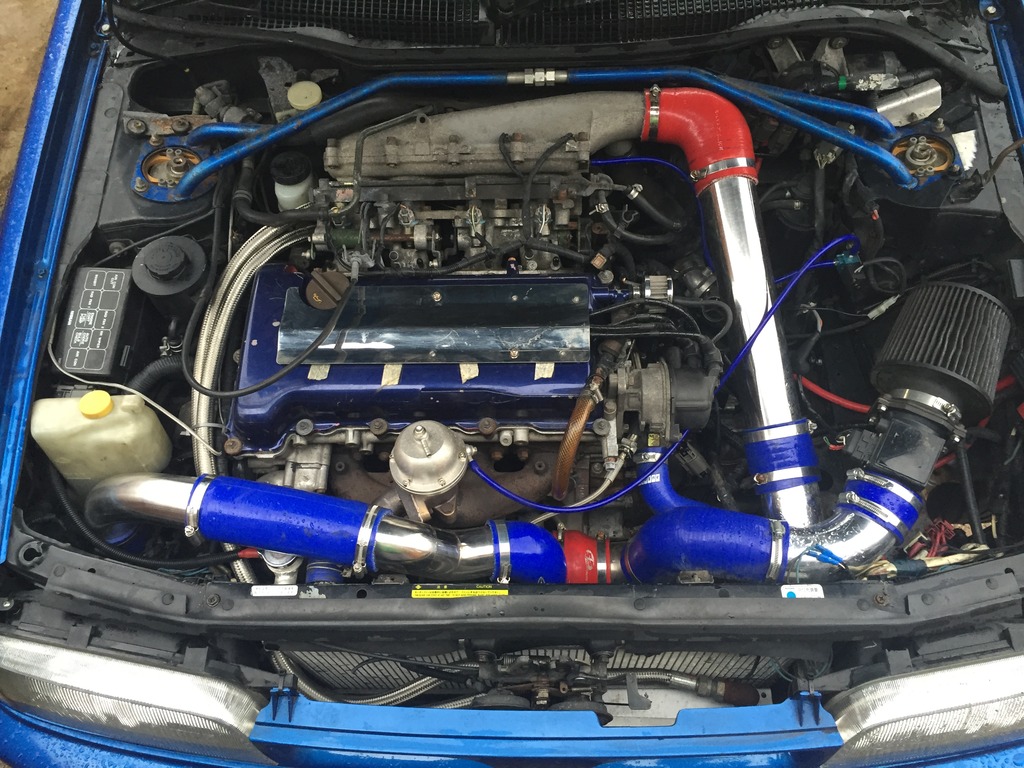 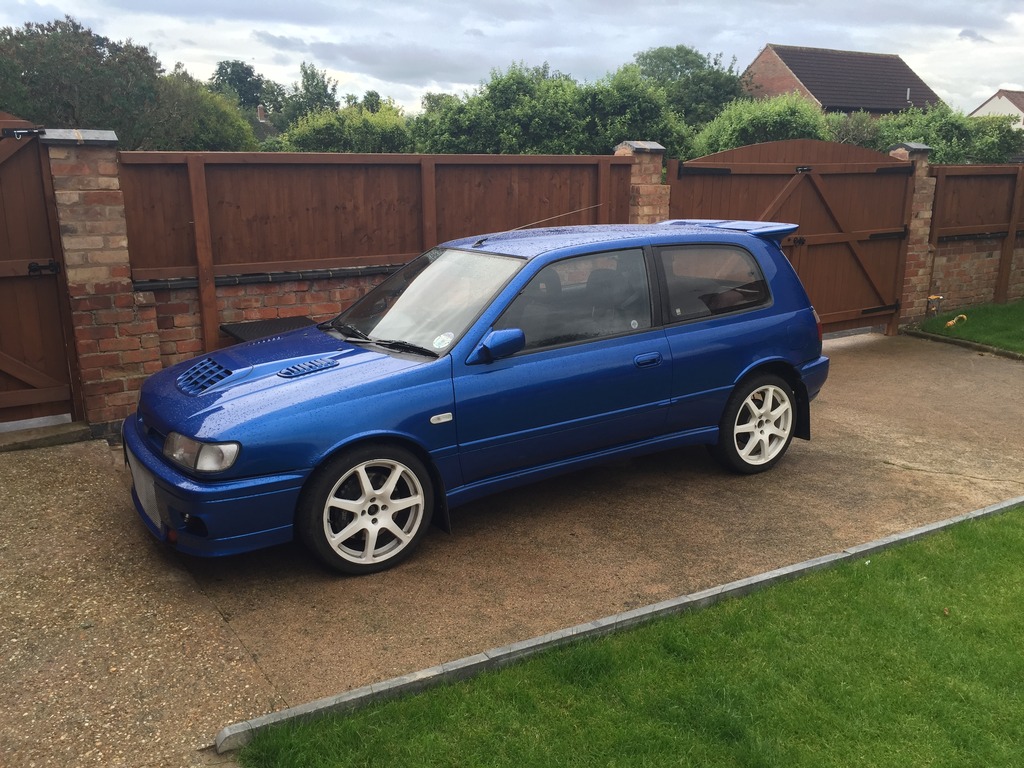 Looks awsome in that colour.
Great spec too

Does look good in that colour, as Stu said good spec as well! Your missing a bonnet height adjuster rubber thingy too.

@burrows1980 wrote:Does look good in that colour, as Stu said good spec as well! Your missing a bonnet height adjuster rubber thingy too.

Good point!!! that might explain the rattle at idle now I have removed the bonnet raisers .
Any idea where I can get hold of a pair ?

I got some from Nissan a few months back, only a few quid each if I remember.

Will dig the part number out for you and the price if I still have the email..

Thank you for that . Very kind if you.

Nice specs, should be a fun car to drive mate

@gtir_woody wrote:Nice specs, should be a fun car to drive mate

Well driving it back from neath was actually really enjoyable . Only negative points I have to say is the drivers side exit exhaust drones and is annoying when the window is open so maybe I will look for a rear exiting system in the future .
The boost comes in so far up the Rev range but when it comes in it's hard!
My last project car was a Crx b18t which had a md214 turbo ( gtir turbo dynamics number) and ran 298bhp and was very responsive . The gtir some how does not feel any faster than this at 1.2/3 bar boost .
I understand the r is 4wd and weighs more , maybe I was expecting to much .

But there is no dyno proof the car is running 420bhp .

It's off to Bob to get his view next week all going well .

I also noticed that there is a very slight gear box whine when in 5th and cruising around 70/80. But It is not in any other gear?!??

Anyway lots to do . Starting with removing the mudflaps .

Mines got a quaife and it whines in every gear,
My wife does the same

When does boost start coming on?

@Cosmic73 wrote:Mines got a quaife and it whines in every gear,
My wife does the same

So now its home the first main job was to have the car valeted . The inside now smells and looks wonderful ! The exterior was also cleaned and polished and lastly the engine bay was de-gunked and pressure washed off.

So job one was to re badge the car after finding all four badges in the glove box.
Then I noticed corrosion and chipped paint on the rear wiper arm so that got a coat of satin black . 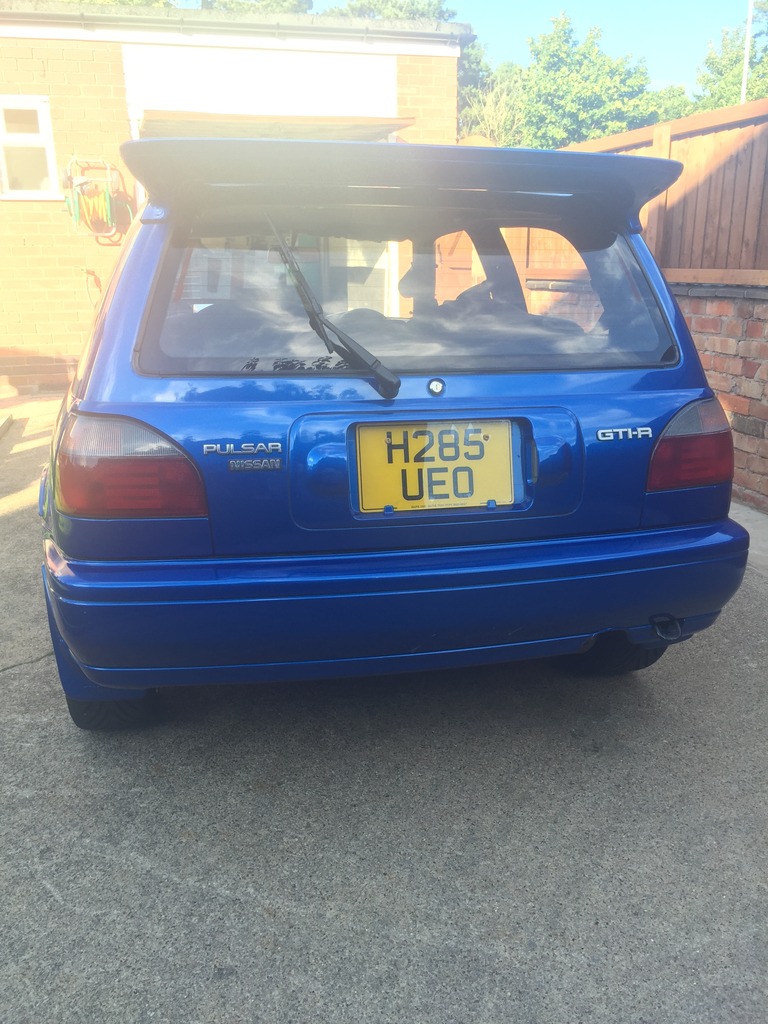 The interior will be getting some work this week as I have a cheap Sony stereo and lots of gauges to mount / neaten up. 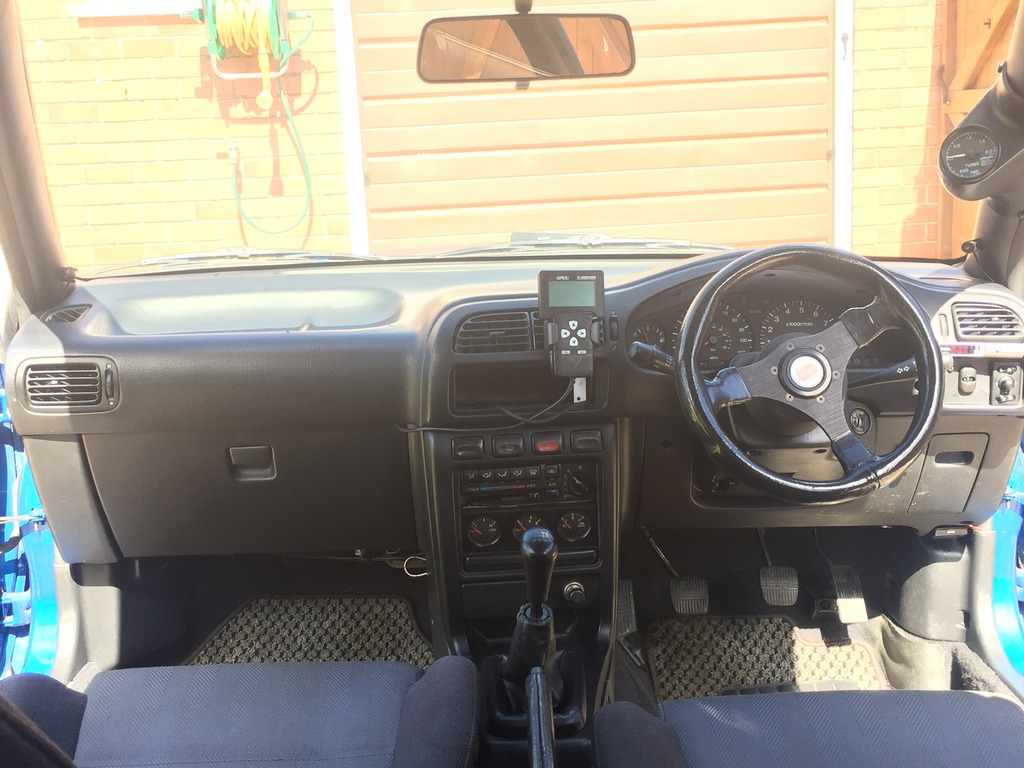 The car sits to high for my liking so I'm on the look out for some springs and shocks to remedy this problem .
Also I have to remover the aftermarket nismo mud flaps . 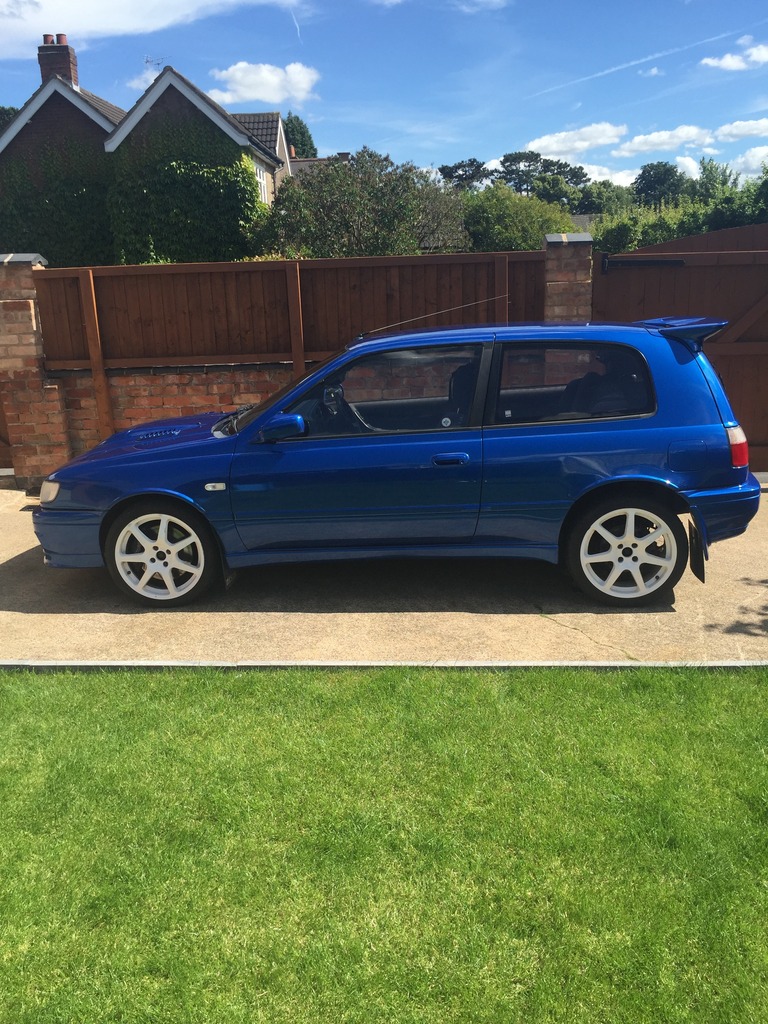 I will be getting under the car this week to see what's what .

That side pic makes it look lowered on the front

Not wasting any time there!!

The flaps are bolted on using the standard bolts, so easy to take them off. Did you find the badge for the front grille as well?

Rear suspension is standard I think. Used to have KYB Super Streets on the back as well, but these got swapped out due to an MOT issue a few years ago. Can't remember exactly what the issue was!

Hello Mike , hope all is well with you and the family ?
in answer to your question yes the front Nissan badge was there to. After a good poke around it does look like you really have looked after this car . I did not know you had full under sealed the car!
Started on the interior today . Brought a stereo and some door speakers so there is sound to drown out the exhaust ! Had the inside wet vaxed and its transformed the front it smells very different . I will pop up a snap when it's done. I have given up now as its to hot and have taken to the (cool) hot tub with a beer and music .