When I go to reply there used to be a large box at the bottom of the page with all the emojis to select, now there's just a thin strip with no emojis, I can click on something that takes me to a large box with the emojis but I can't actually select any.....what's going on?

I've got the large text box with all the emoji's shown, as you desribe. Have you been fiddling with your browser's compatability settings or something?

I have this same problem using my iPhone after updating to iOS 10, select the "post reply" option and the box appears correctly again.

Yes it's happened since I've updated, but when I click the post reply button and the box box comes up with emojis it won't let me select any!! 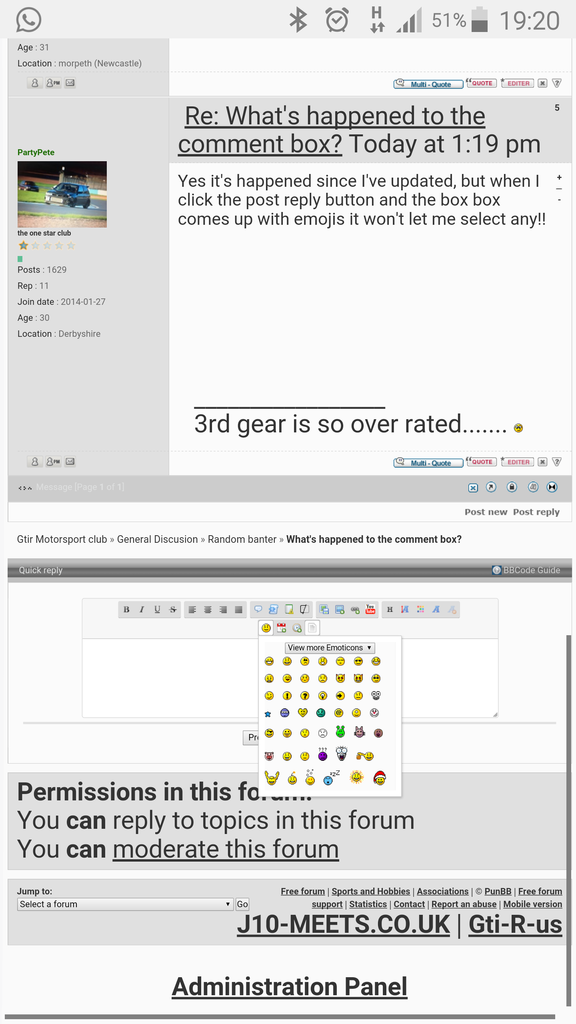 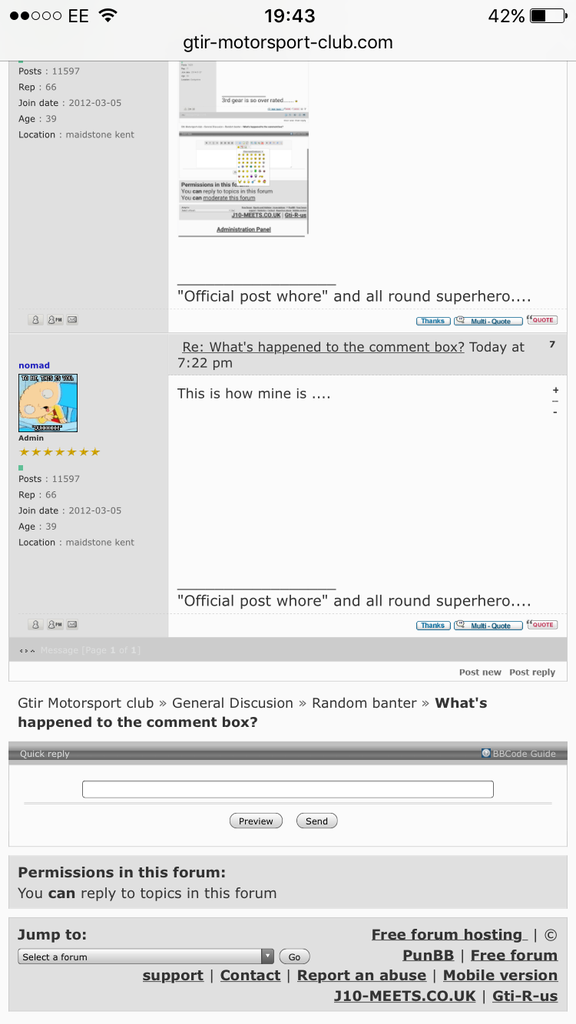 And this is mine

It browser issue on IOS !?
it fine on Windows 7 , WinMobile6.5.5 , and android 5.1.1 that I just tried . wifes iphone okay but she on jailbroken IOS 8 so assume it wanky coding from Apples latest junk ... IOS 9 & 10 had some serious shit released, worse or as bad as crap that MS let through the beta & rc tester stages :-/

So basically that's sweet f a I can do about it

ebay your iphones and buy a xiaomi ...
Can't even rol back OS versions easily on ios due to digitital server signing during flashing .
Apple producing buggy junk just as good as android & windows these days but at least with latter a smart 12yr old can put it right & blog the solution, ios is a ballache unless rooted .
Fucking annoying for you guys .

Can you try chrome on your devices?

There might be an update to forum from forumotion however I doubt it would come soon.
_________________
Now Shagging sheep on the cheap
You wont find one that's for keeps
Spend the money, find a honey
'Shit' think I need to sell my Sunny!

But woman cant replace a sheep
Oh I wish that for the peace!
But I really cant find my honey
The only one I would give my money
Is one with a great big fleece
And then I would be at peace...

ive always been a fan of apple but slowly getting over them. Ive been thinking about buying a new tablet, thinking of a samsung this time around.

I made a switch from iPhone to Samsung and was a big mistake, hated it! Back to iPhone, I don't know why people moan about them, never had any trouble up to now

Depends what use them for. If not rooted they pita with restrictions on email attachments etc . Plus price is fooking ridiculous and no removable memory so lot of data lost in failure scenario, iPhone 6/7 hated here as screens so easy busted, 4 & 5 are strong bits of kit though .
Wife's is rooted with some sensible researched tweaks and it is pretty damn good.
Xiaomi devices like Redmi note 4 on miui 8 android worth looking at as takes best from iOS and android .
Burmese friend of mine just got one after I mentioned it and he loving it after Samsung junk, better stuff out there if willing to try and to learn something new .

Exactly mr b iphones are pretty shit without jailbreaking them wich basicly says it all really .... much prefer an andriod based software much more easier user interface that doesnt need much tweaking if any ...
_________________
"Official post whore" and all round superhero....

Android okay but it inefficient code hence why need so much RAM & so many cpu cores . I install computer controlled manufacturing plant equipment that needs less ram than a android phone, it fooking ridiculous lol .
Android bit easier achieve many task but still many issue without rooting, Language font support being one, why the fuck Google do not have 100% support for all languages or an easy font linking folder for adding secondary font for unsupported languages is beyond me, they simply are not trying.
burmese language being a big problem but fortunately xiaomi devices is easier fix via a burmese zawgyi  font added in a theme file rather than rooting and adding modded system fonts.

Advertising in apps is also a big piss off for me I fooking hate it :-)
Amount of google bloat sucks too .

Not that any other phone OS is much better these days, they simply not trying very hard.
Windows done some impressive stuff between 2003 & 2006, Iphone ios and android had not even been born but if you look at wm2003se & later wm6 you will see how similar android notification bar etc is and also see winmobile had bounce effect in menus when swiped to end so not an apple miracle idea at all.
also wm2003se had obd software and could connect to our R nissan obd1 for fault data & onscreen sensor dials etc and that was 13 years ago ...